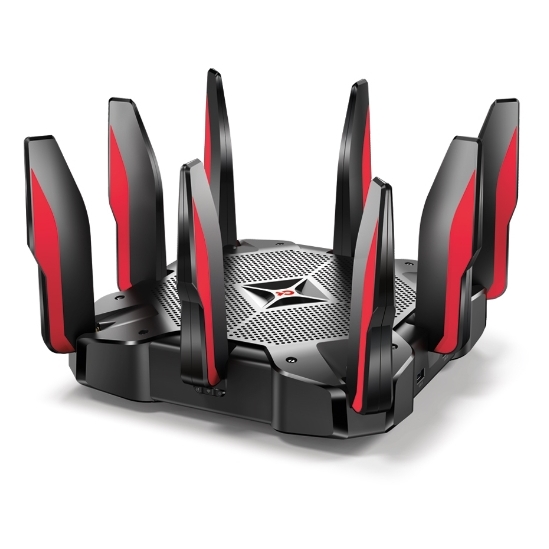 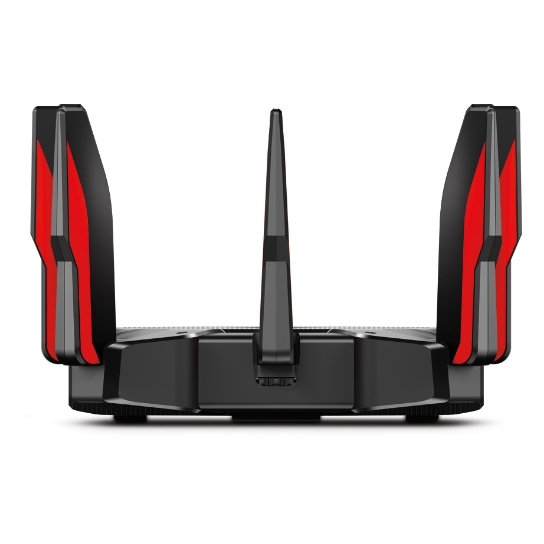 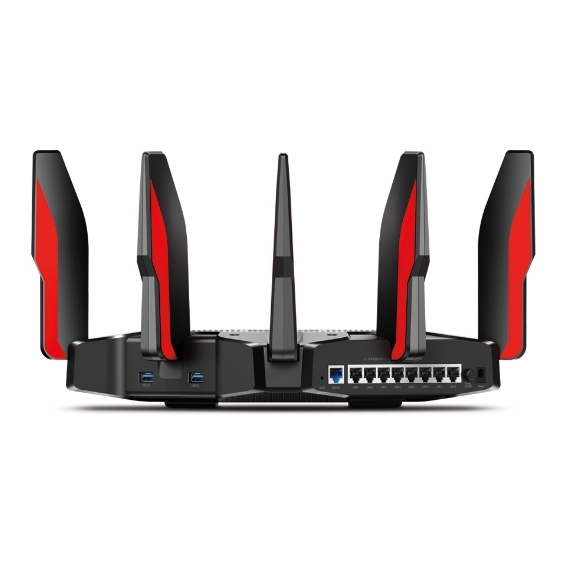 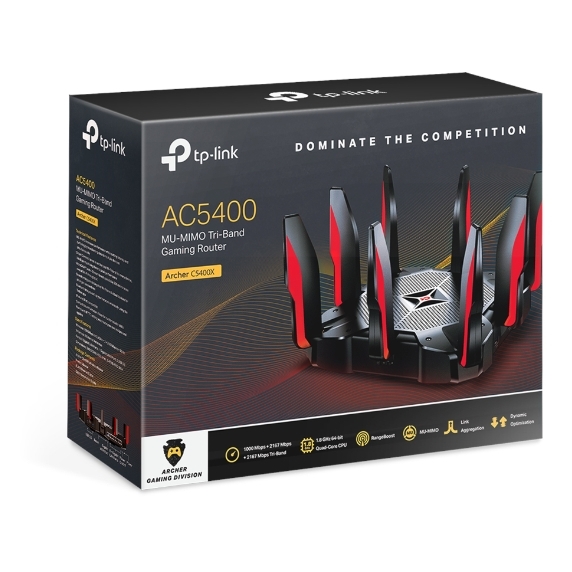 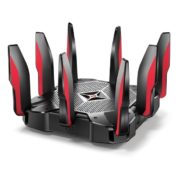 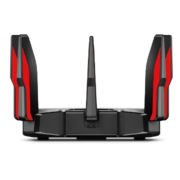 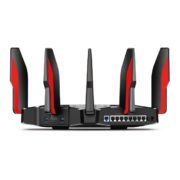 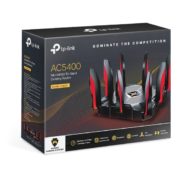 DOMINATE THE COMPETITION
AC5400 MU-MIMO Tri-Band Gaming Router
You’ve spent hours picking the perfect parts for your gaming rig. Now get the most out of it with the Archer C5400X—the router designed to power the performance demanded from high-end gaming rigs.
BATTLE-TESTED PROCESSING
When you game at the highest settings, it’s imperative you have impressive processing power. Quad-core means power. With a 1.8 GHz 64-bit quad-core CPU, three co-processors and 1 GB RAM, the Archer C5400X delivers the raw power required to perfectly execute every service, thread and application to eradicate latency and deliver smooth gameplay.
INTELLIGENT TRAFFIC PRIORITIZATION
The Archer C5400X conquers lag, immediately eradicating it from your gaming experience. Its dynamic optimization engine automatically identifies gaming traffic to give you the tactical advantage during heated raids, PvP encounters and ranked matches. When you aren’t gaming, fast-track streaming to watch immersive 4K movies.
BLISTERING WI-FI SPEEDS
Get into the action with incredible AC5400 tri-band Wi-Fi speeds over the 2.4 GHz (1000 Mbps) and two 5 GHz bands (2167 Mbps). Three Wi-Fi bands make it easier to streamline your network and stay competitive in the heat of battle.
Dedicate one band to gaming traffic while the remaining two deliver high-speed Wi-Fi to the rest of your home. Or enable Smart Connect to have the router zero in on the best Wi-Fi band for every device, intelligently driving them to peak performance.
FULL-THROTTLE WIRELESS PERFORMANCE
The Archer C5400X employs MU-MIMO and Airtime Fairness to balance the requests of every device with speed and precision. Calibrated metrics and sophisticated algorithms determine how the router divides air time and distributes dedicated Wi-Fi streams to each device, leaving you to focus on taking down the opposition instead of fighting your allies for bandwidth.
FAR-REACHING WI-FI RANGE
Game from the basement to the garage and even the backyard with RangeBoost, which strengthens reception quality to reinforce connections in your home and keep both older and newer devices connected at greater distances than other routers.
ACCELERATED
WIRED CONNECTIONS
With eight Gigabit Ethernet ports, you can connect PCs, smart TVs and game consoles to fast, wired connection without needing a switch.
Team two LAN ports using Link Aggregation to double connection speeds from 1 Gbps to 2 Gbps for Network Attached Storage (NAS) devices and PCs with LACP. Combine the WAN port with a LAN port to connect DOCSIS 3.1 modems for best-in-industry internet speeds.
FORTIFIED INTERNET ACCESS
Secure your data no matter where you are by using the built-in VPN and OpenVPN to create a private network with PPTP while VPN Acceleration increases connection speeds up to 5x faster.
CONVENIENT FILE STORAGE
The Archer C5400X has 16 GB of free storage built-in and protected behind its firewall, which you can access through the TP-Link FileBank app whenever you have an internet connection. Expand storage by connecting USB drives to the router.